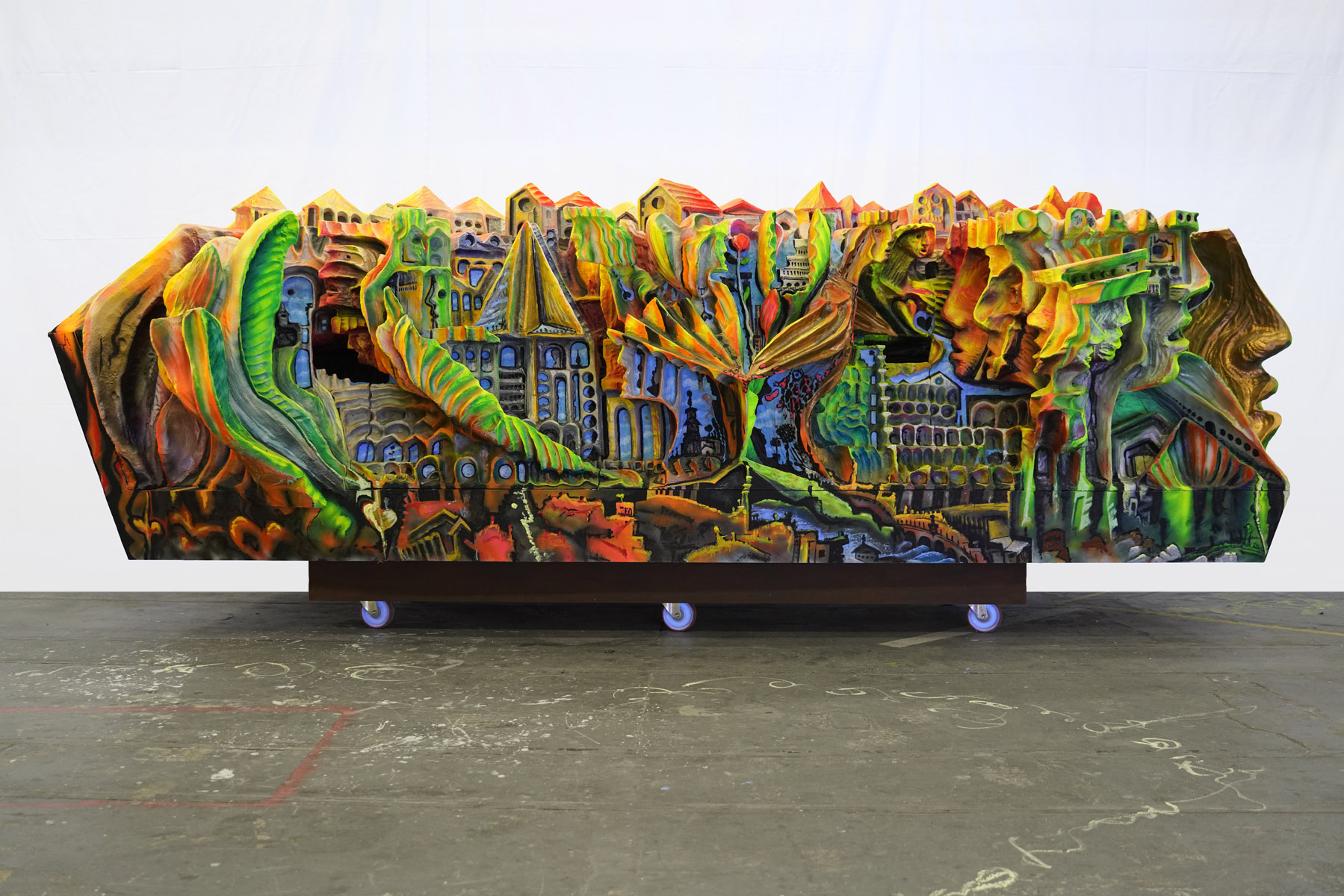 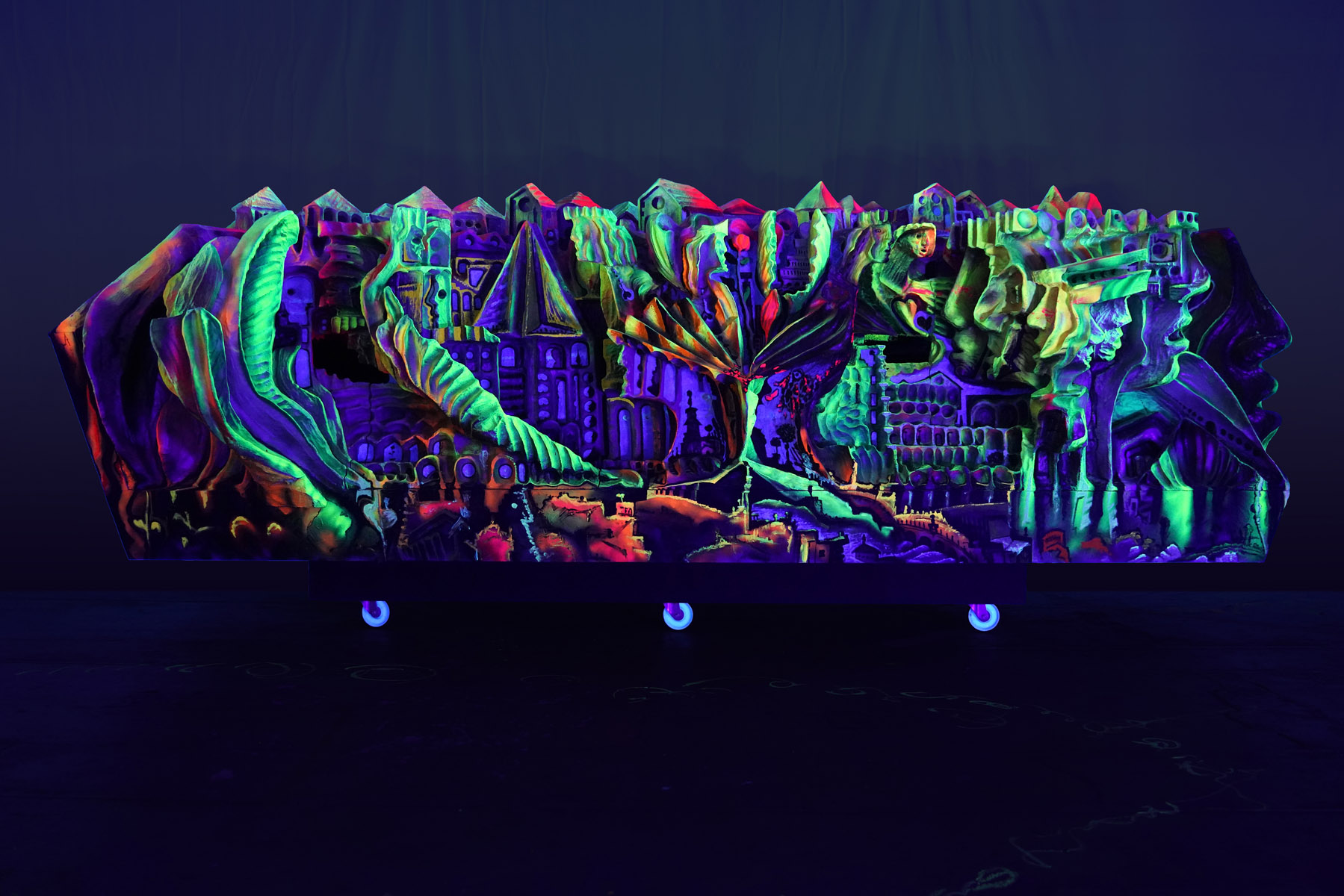 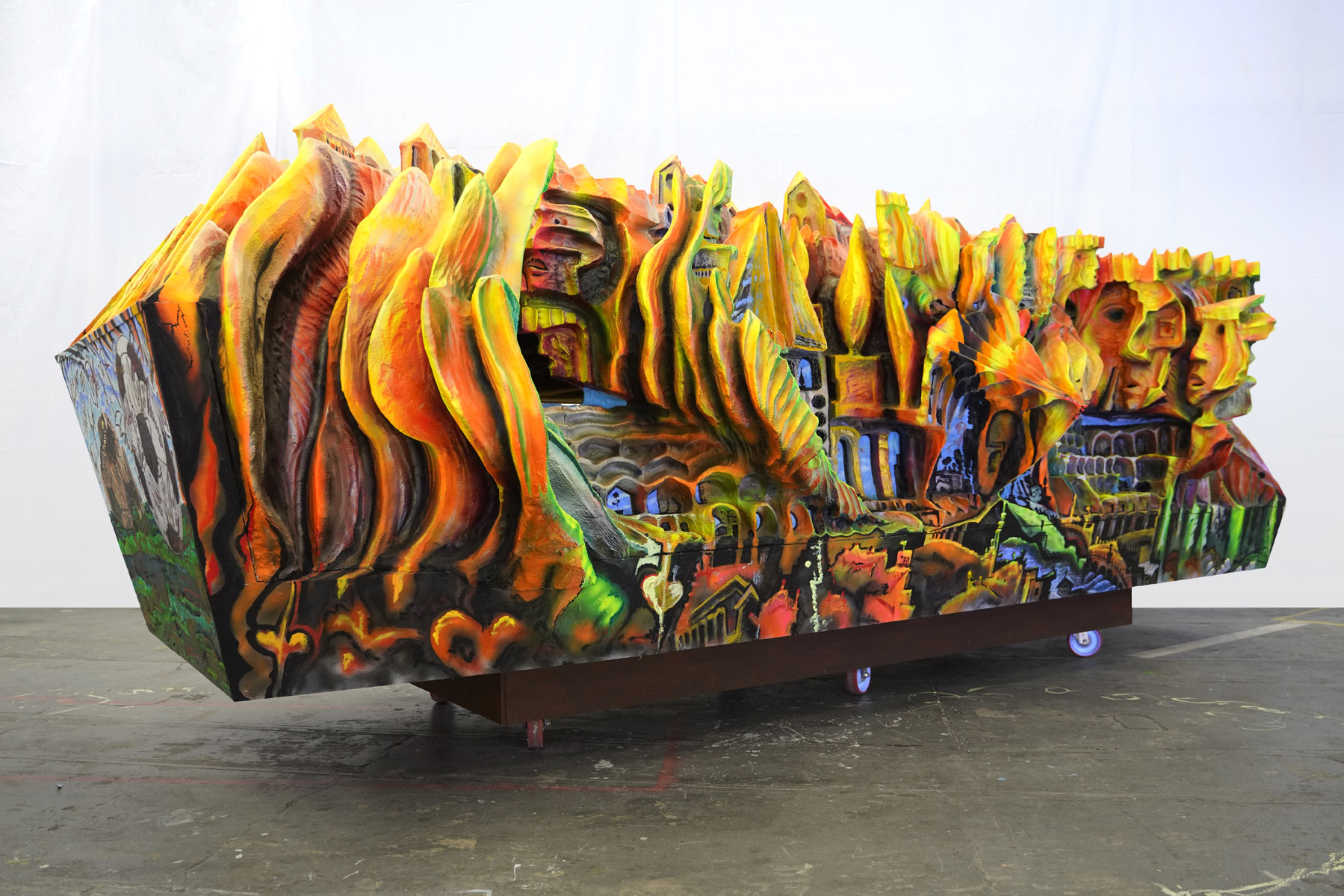 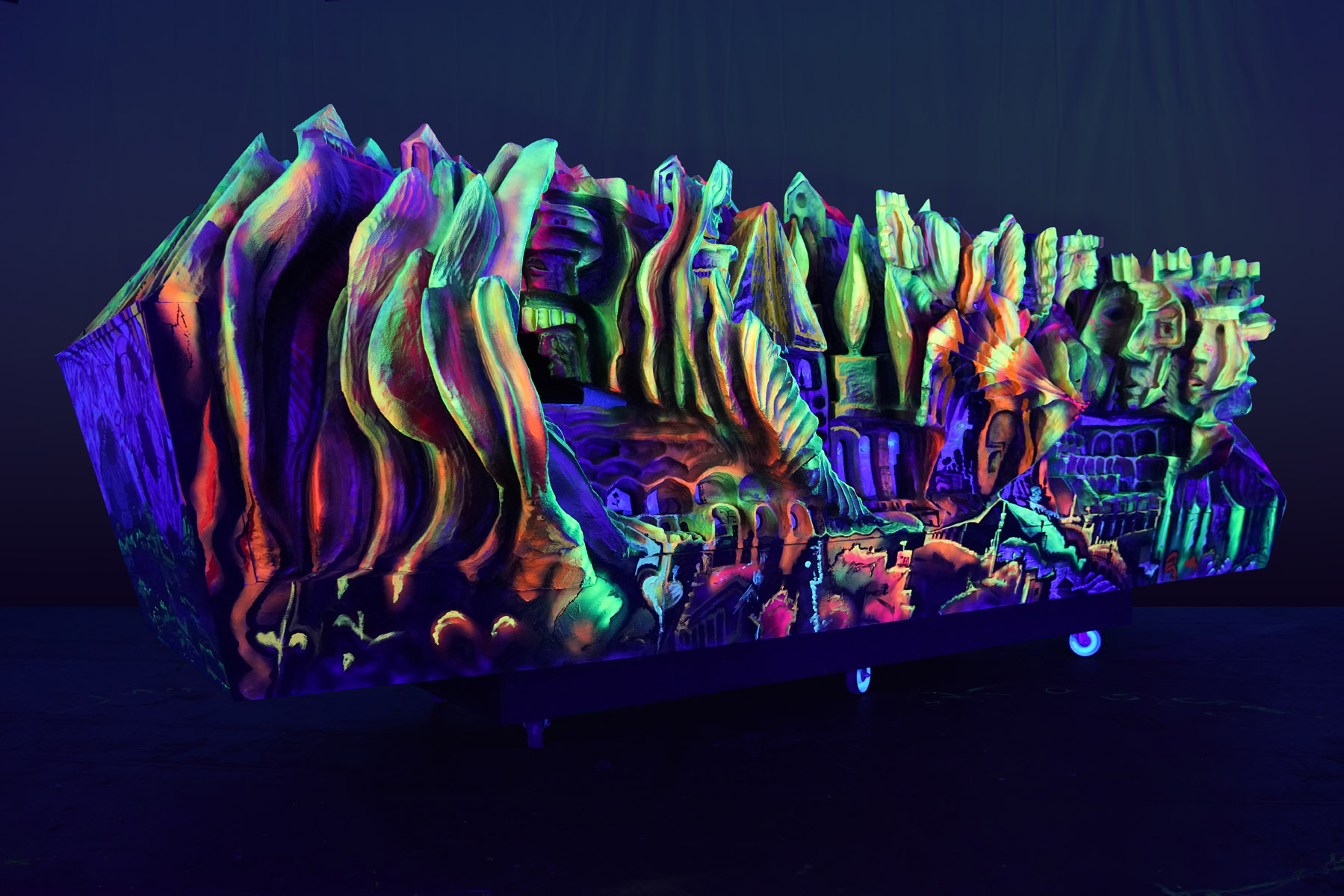 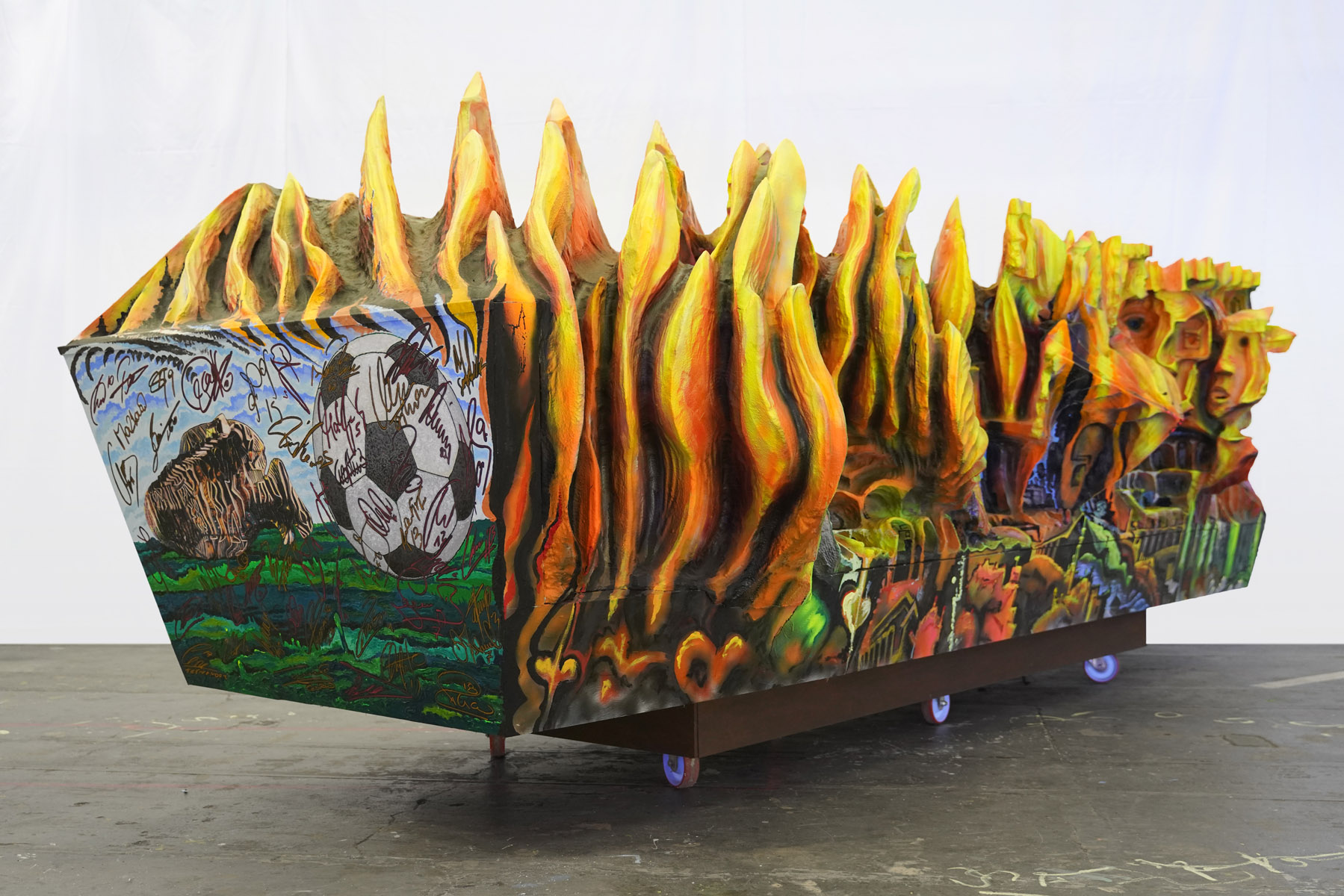 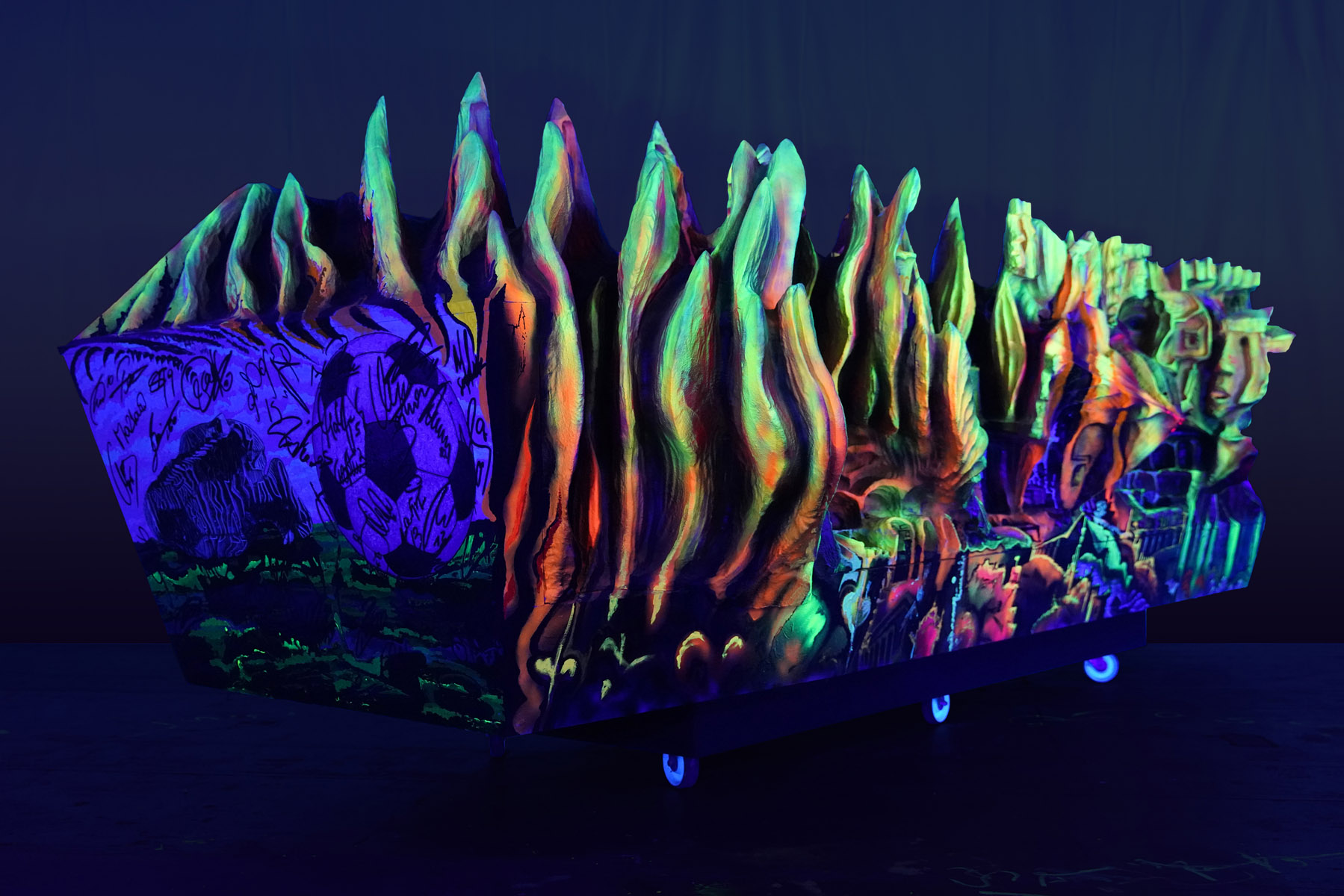 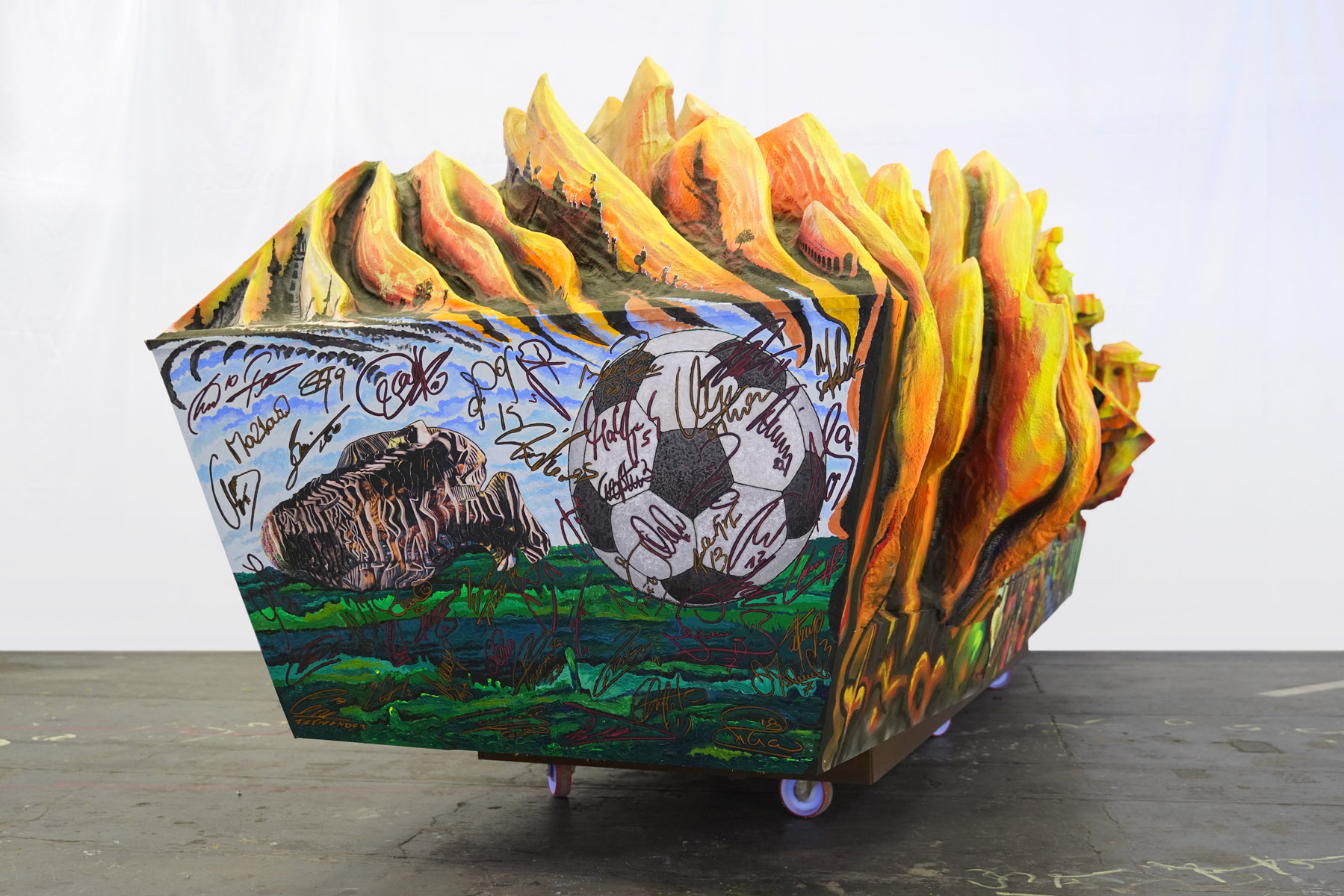 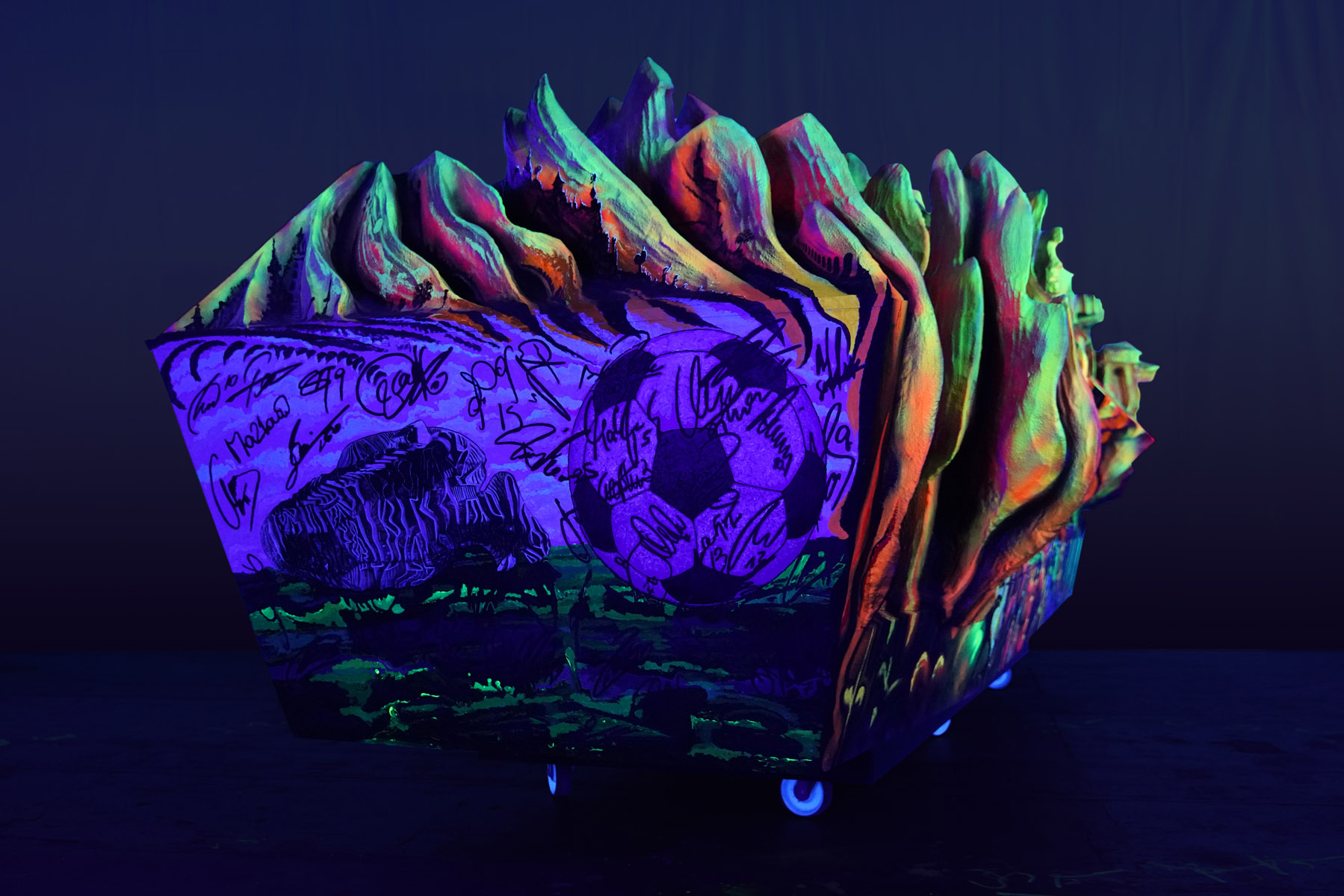 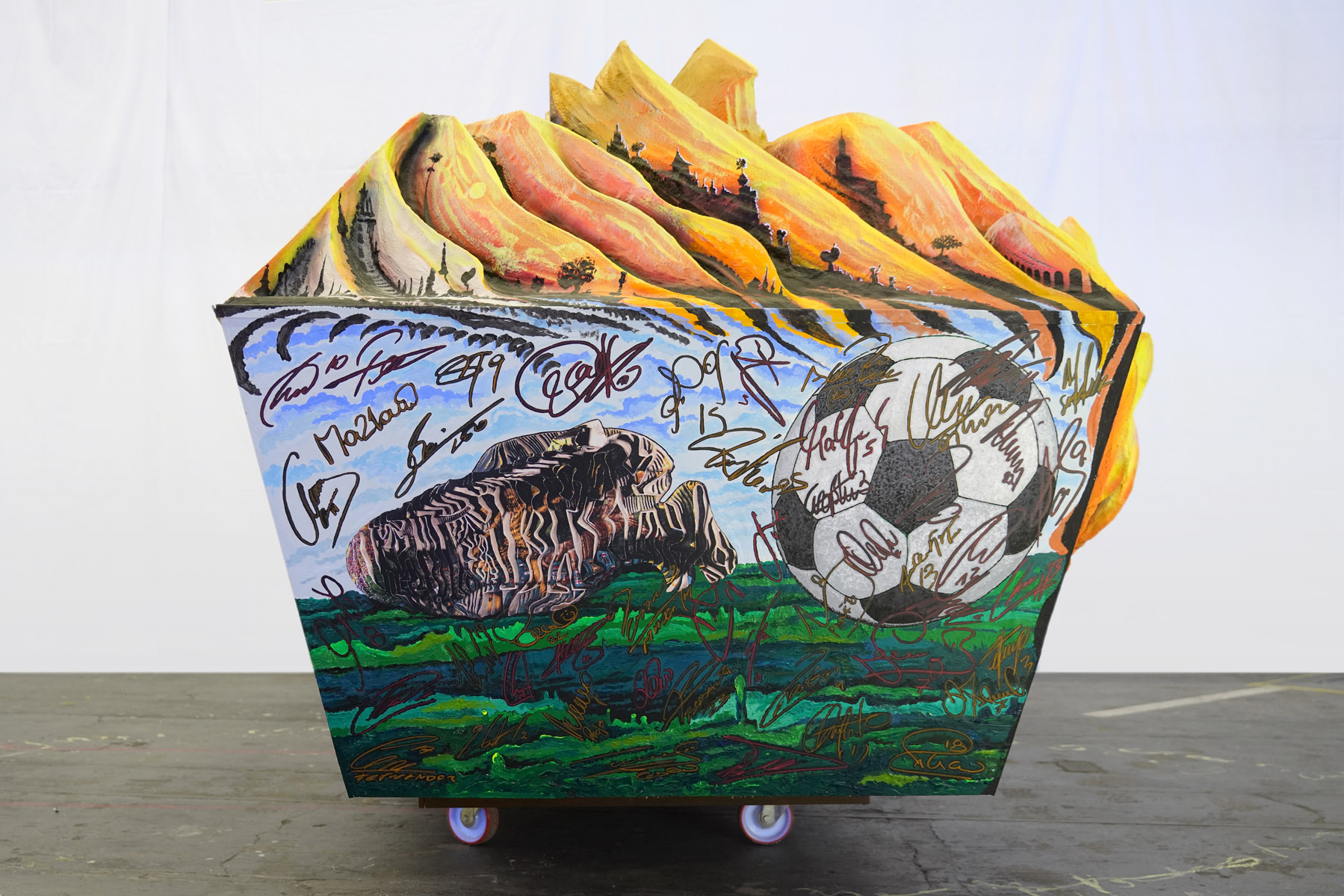 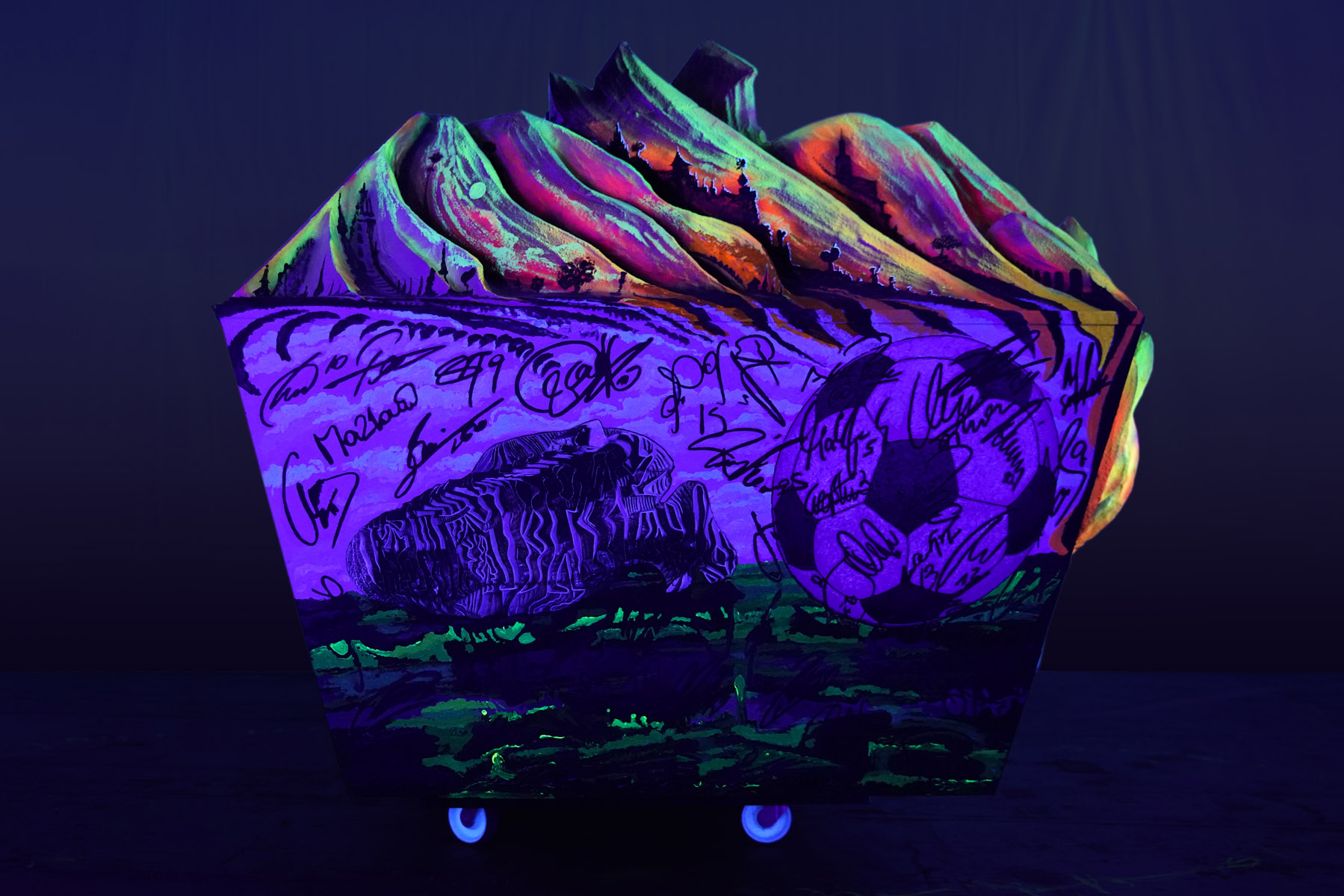 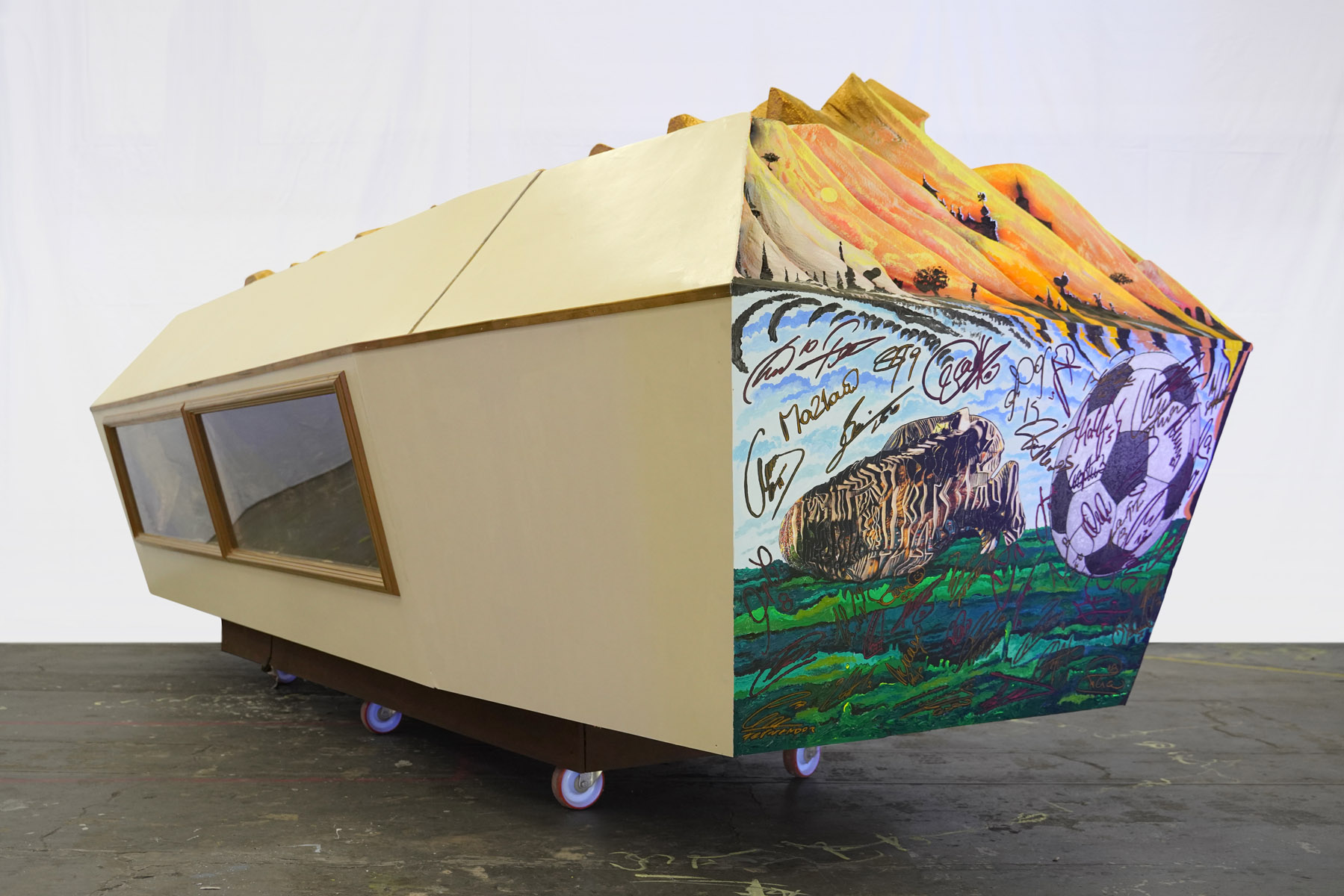 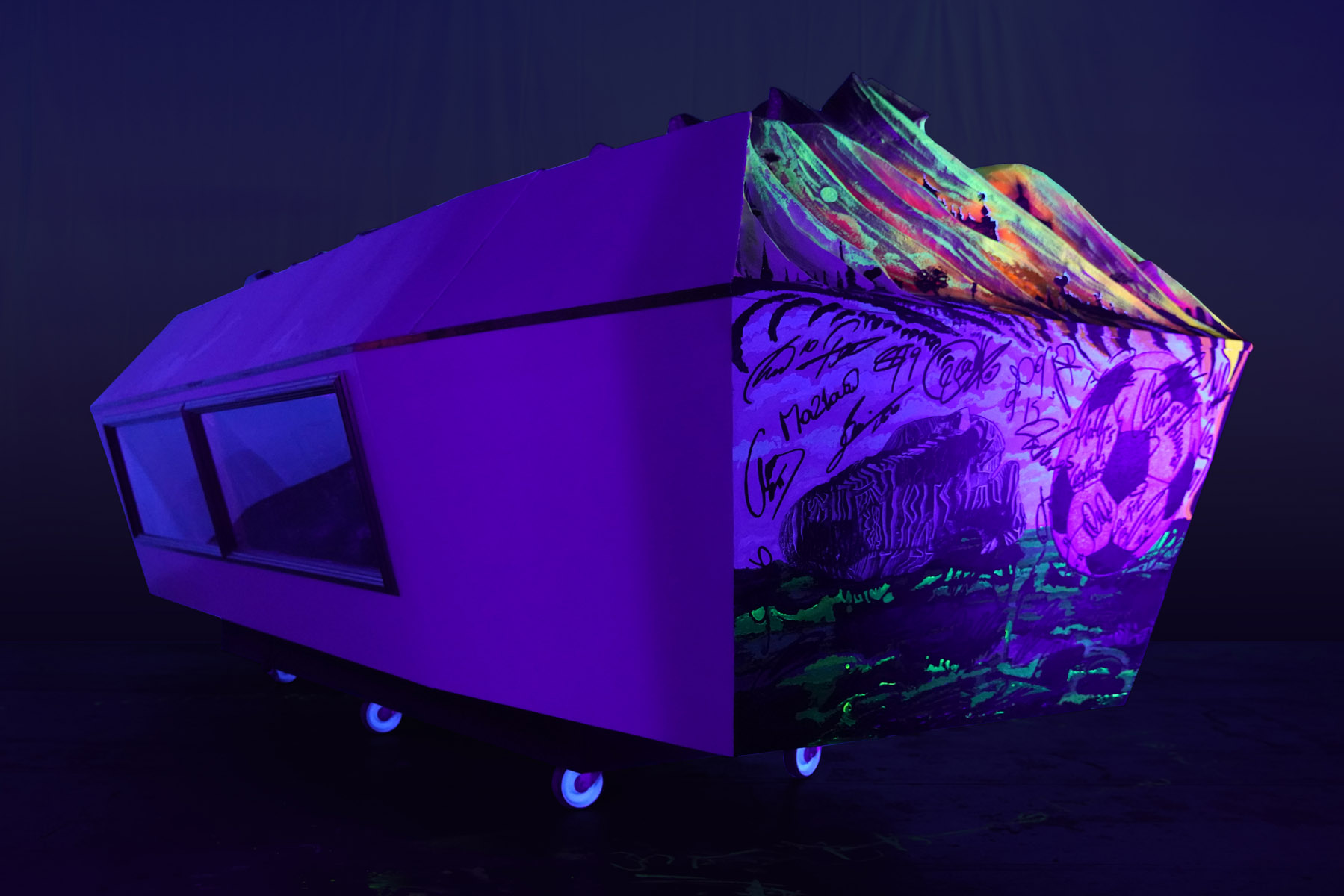 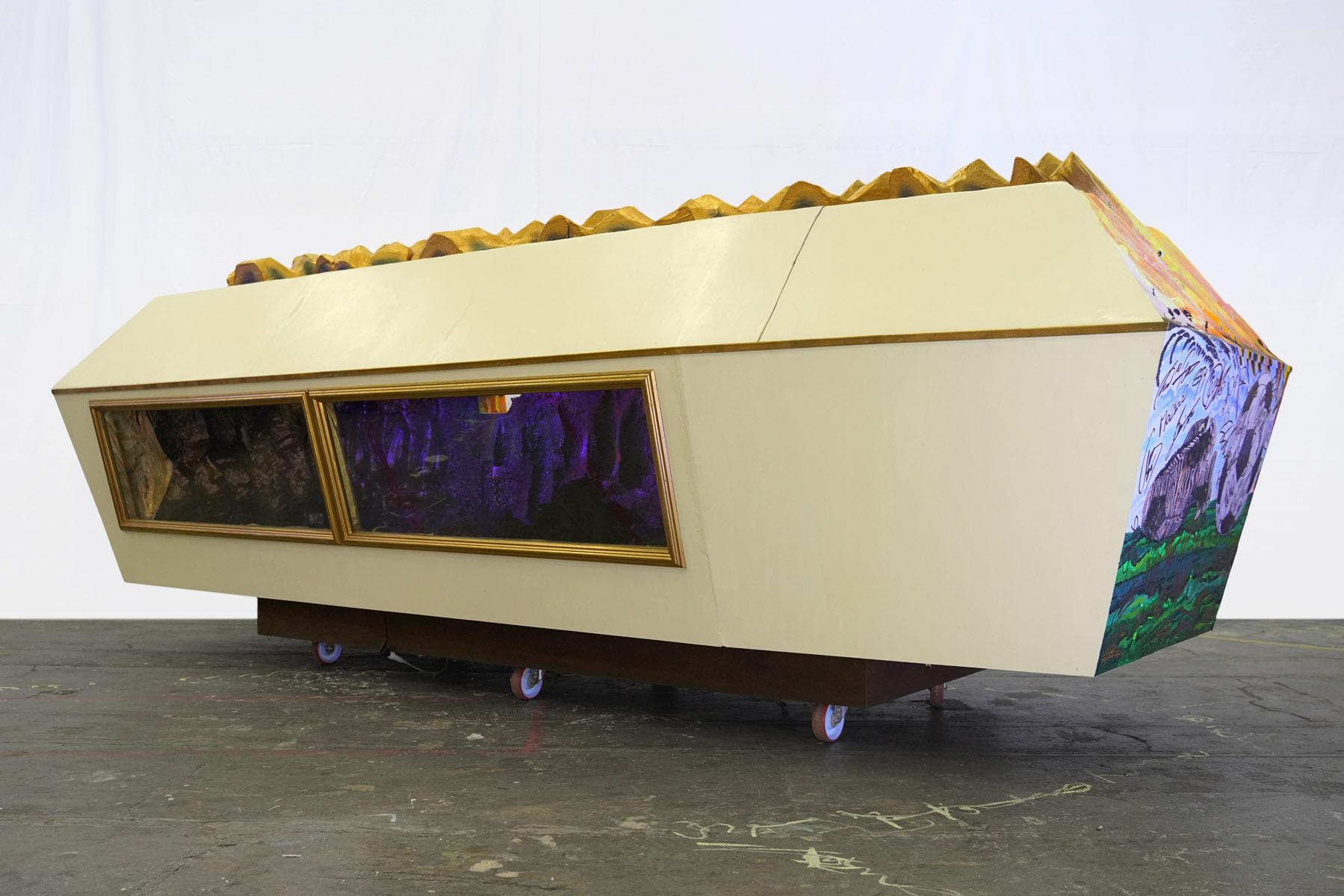 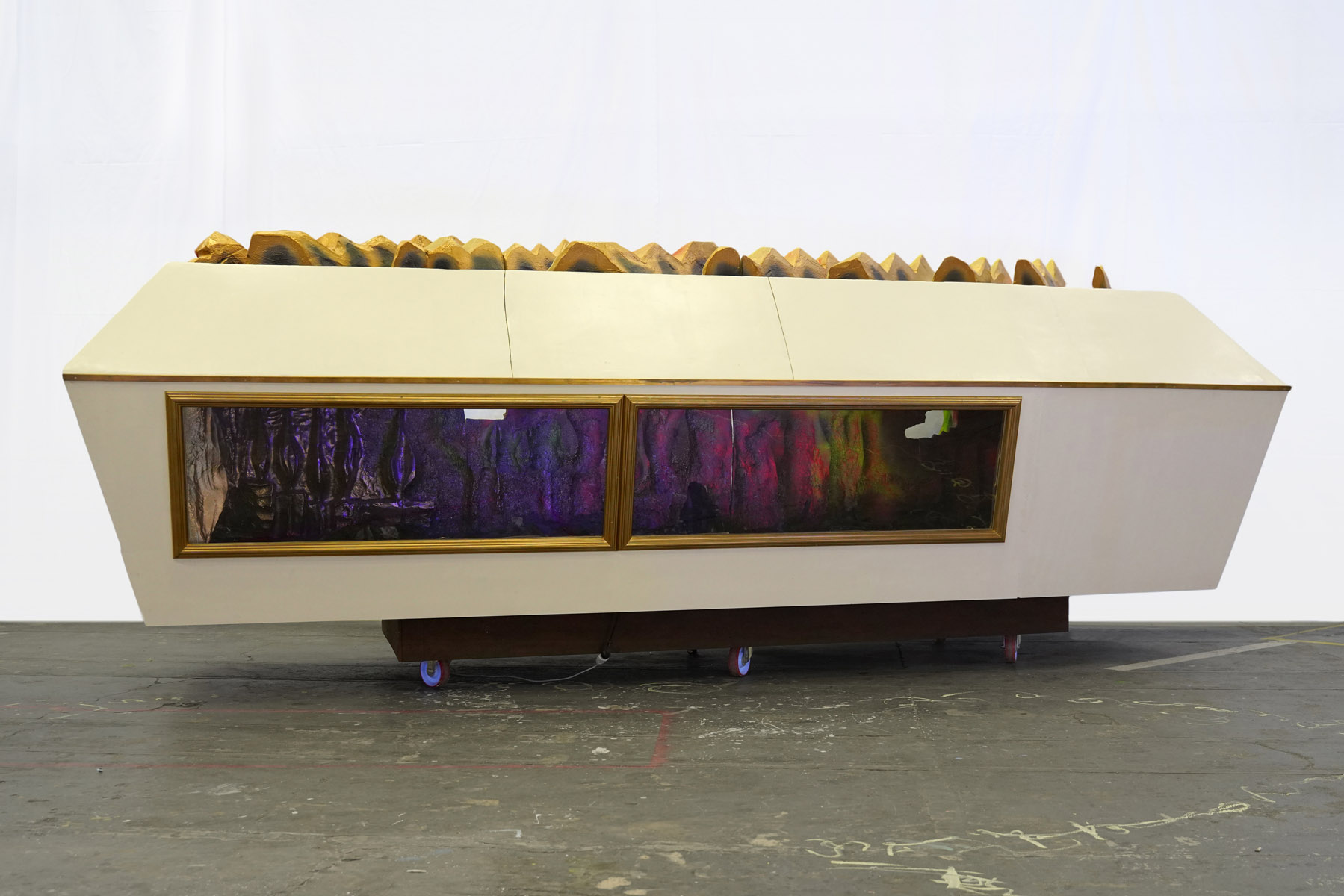 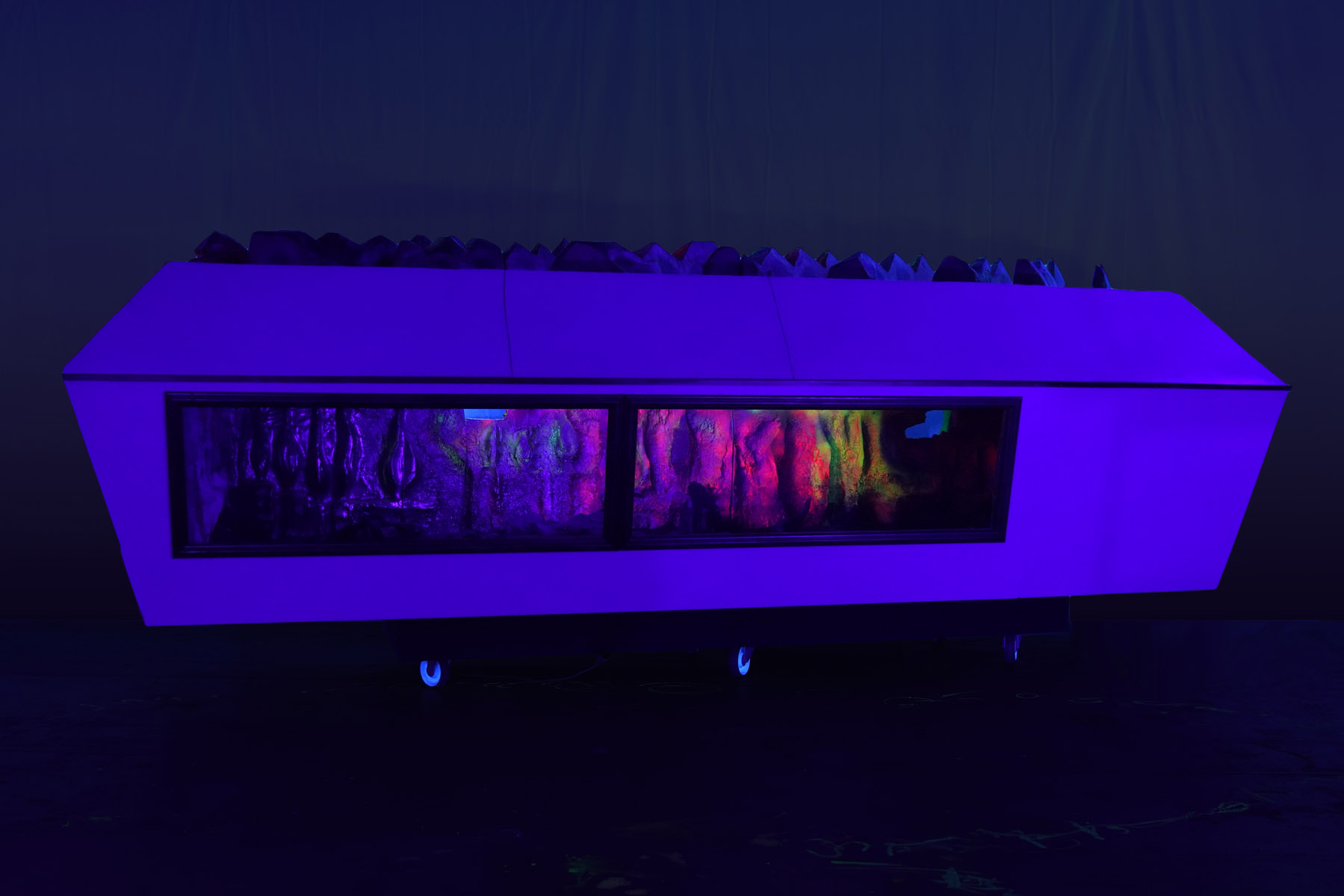 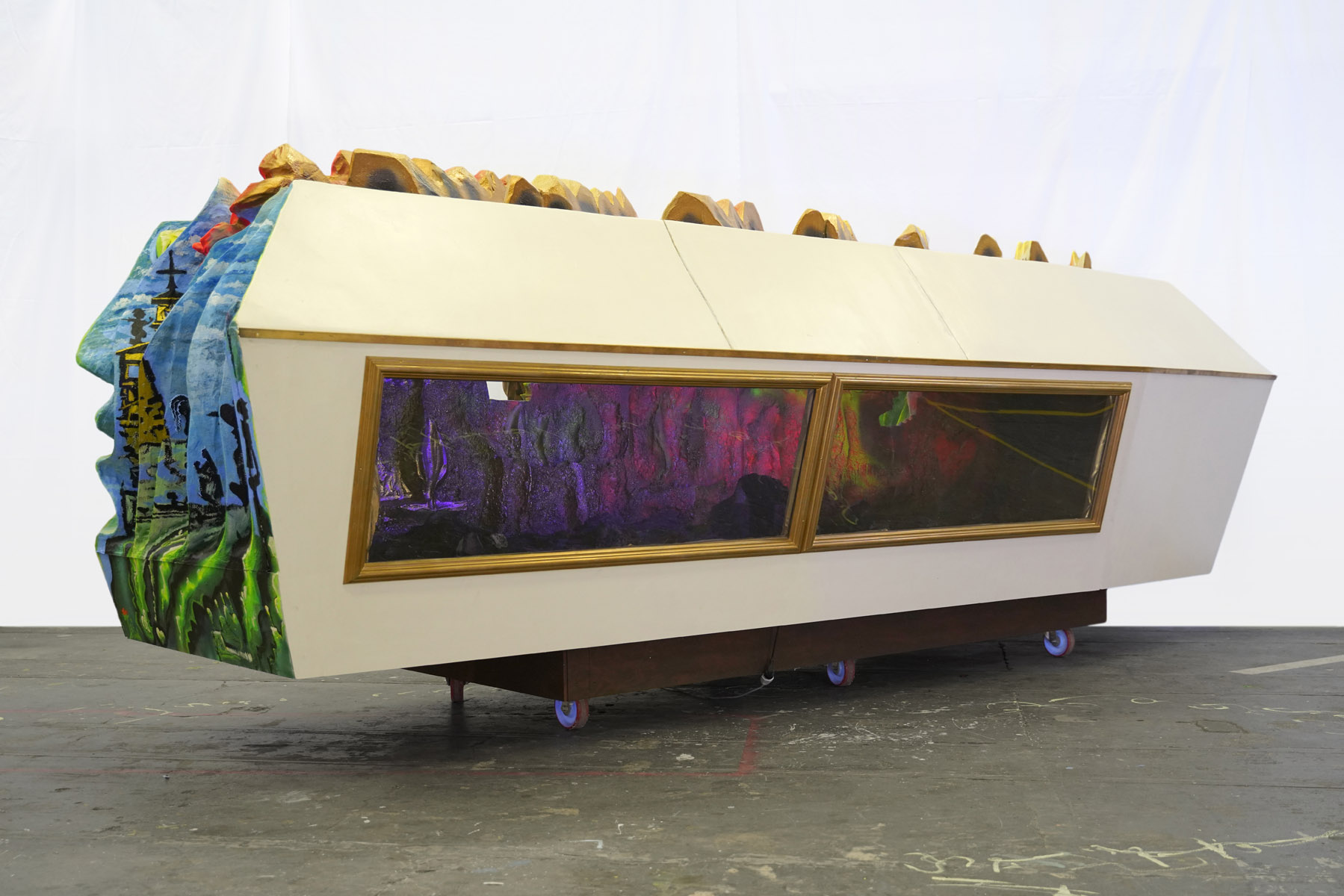 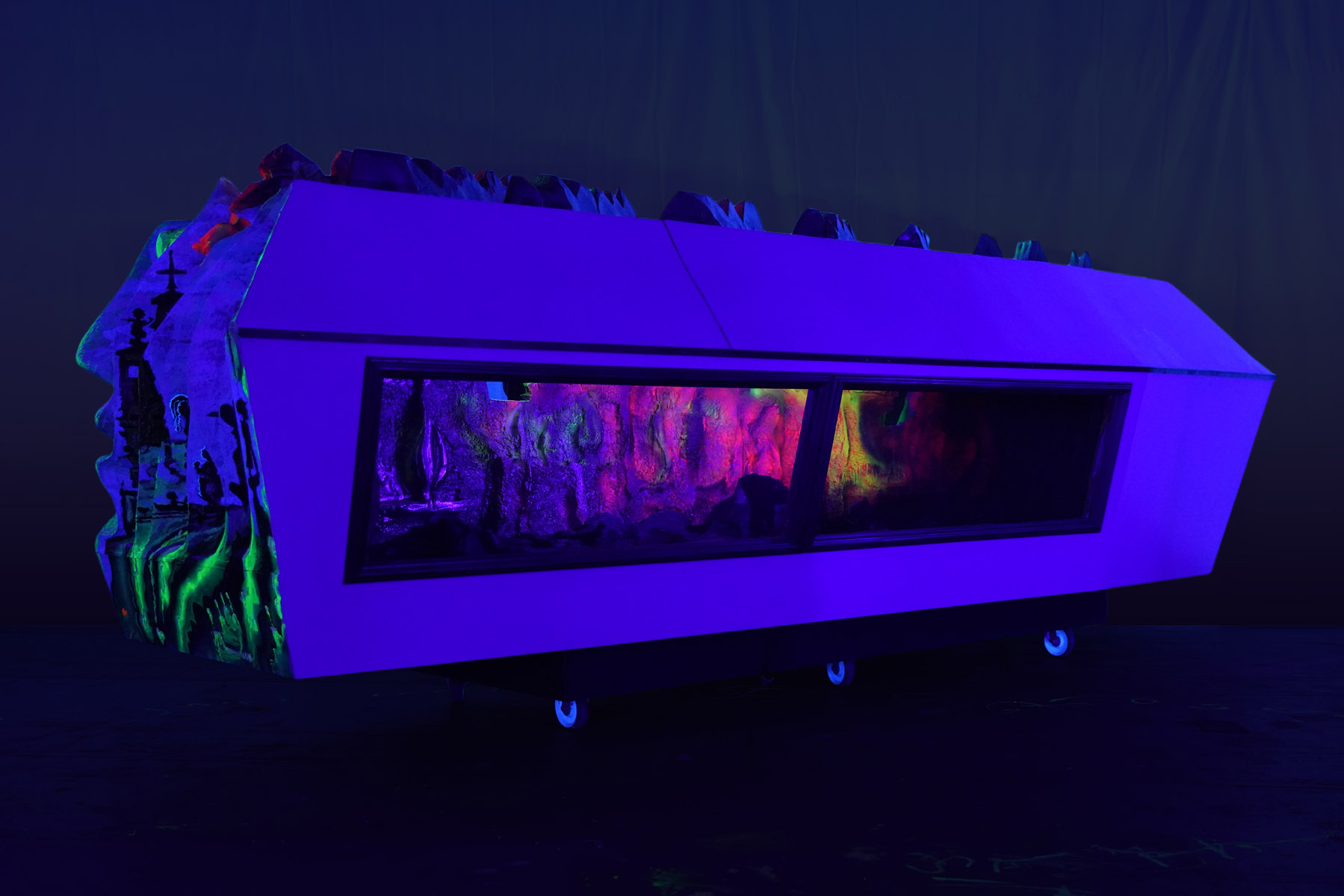 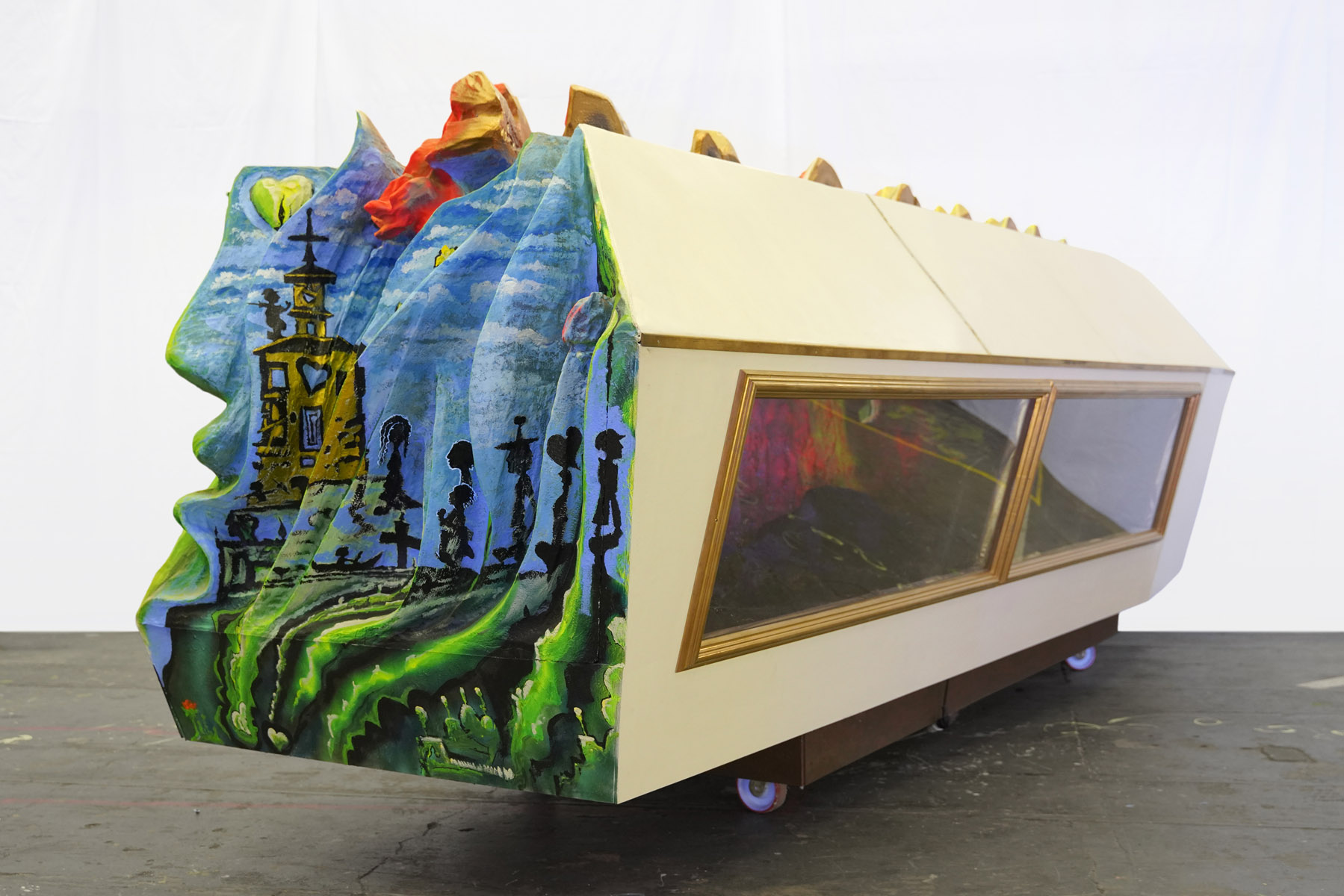 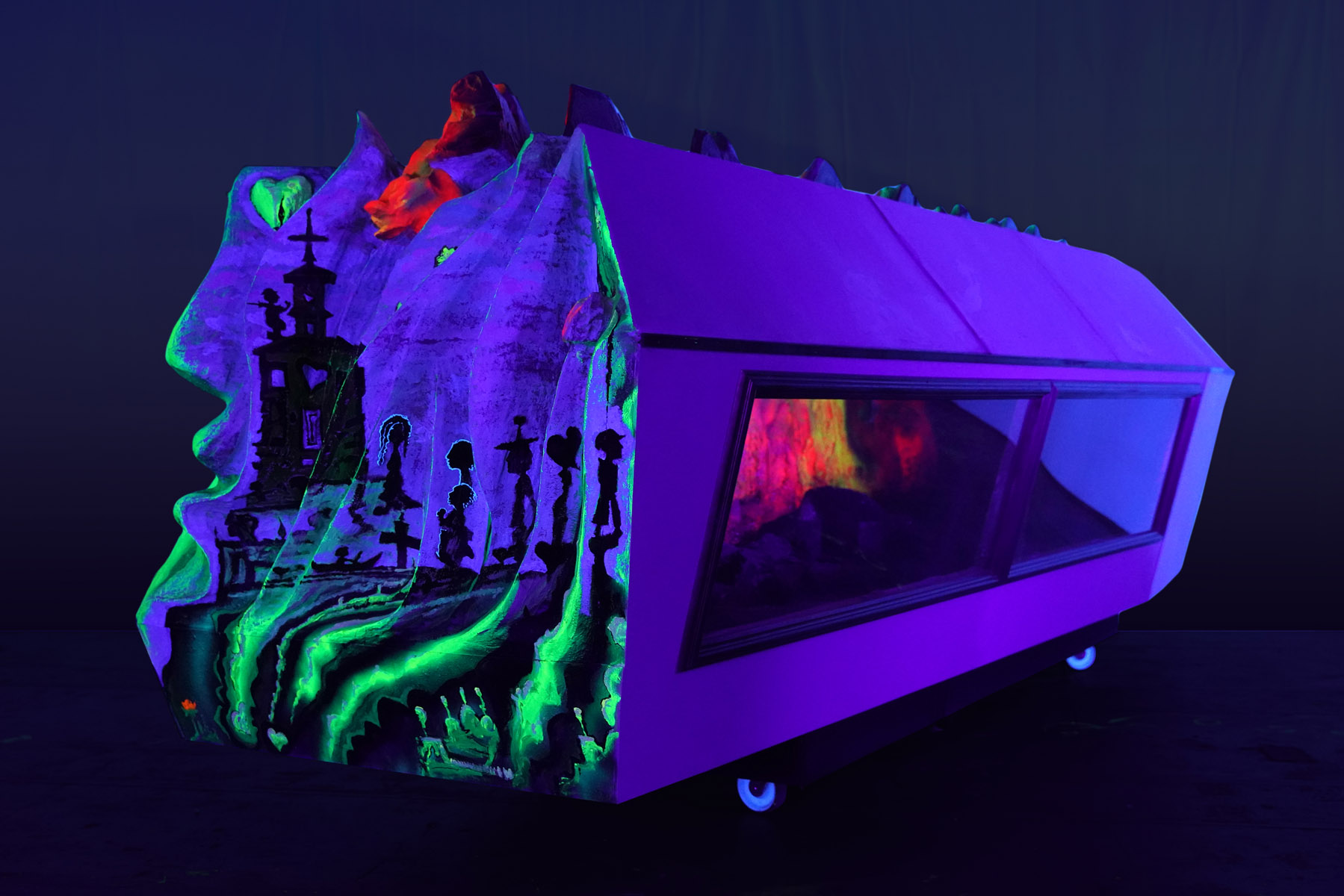 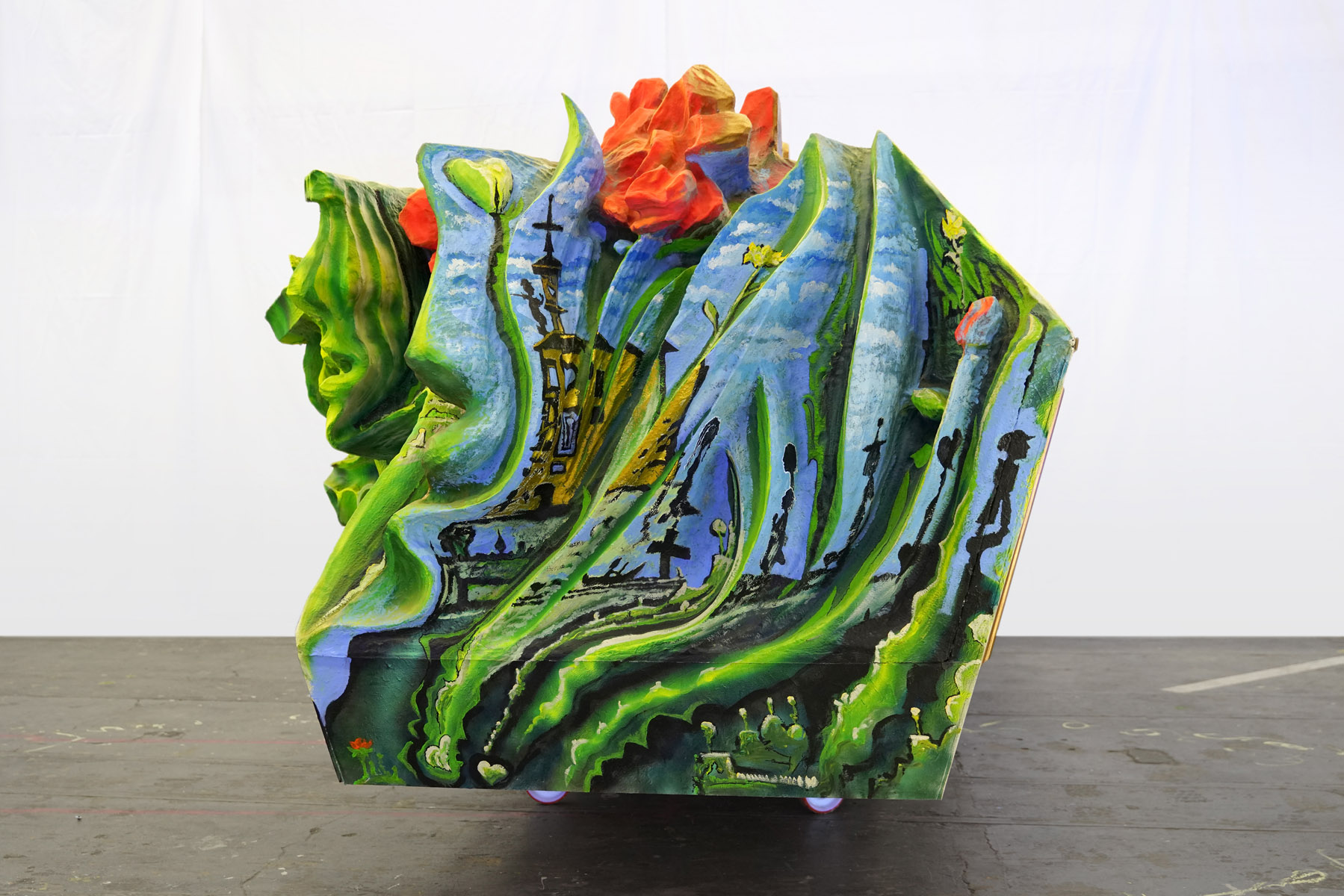 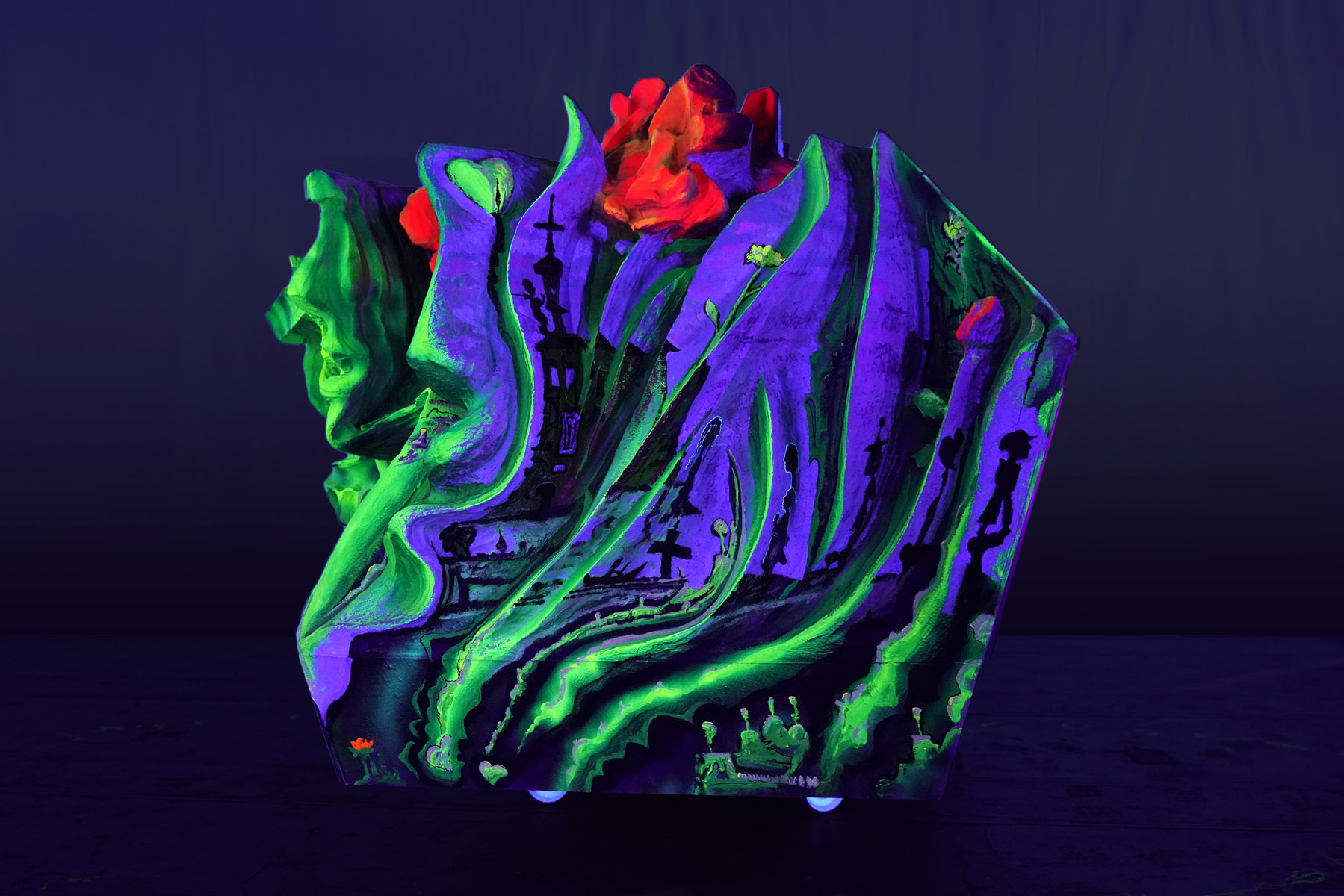 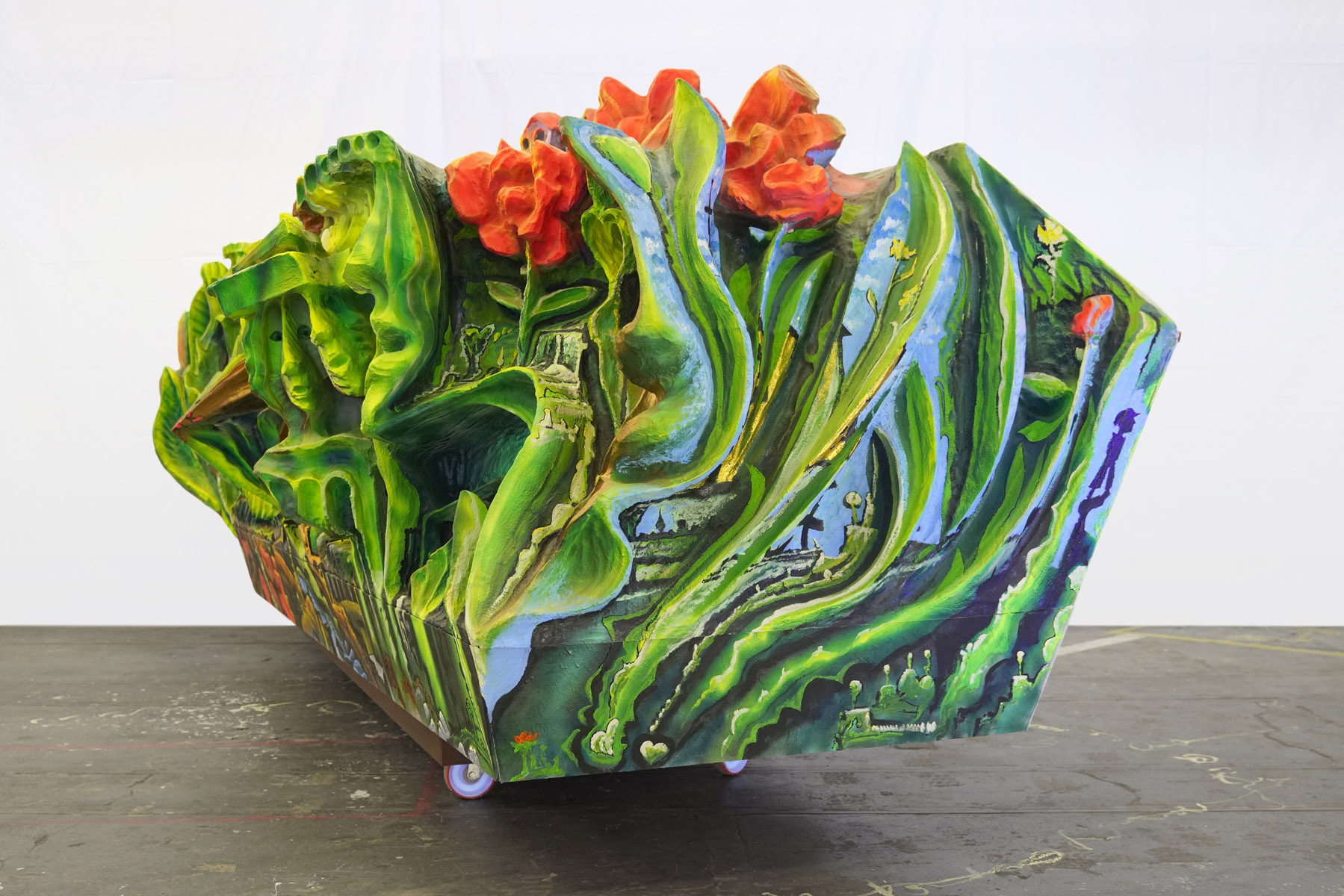 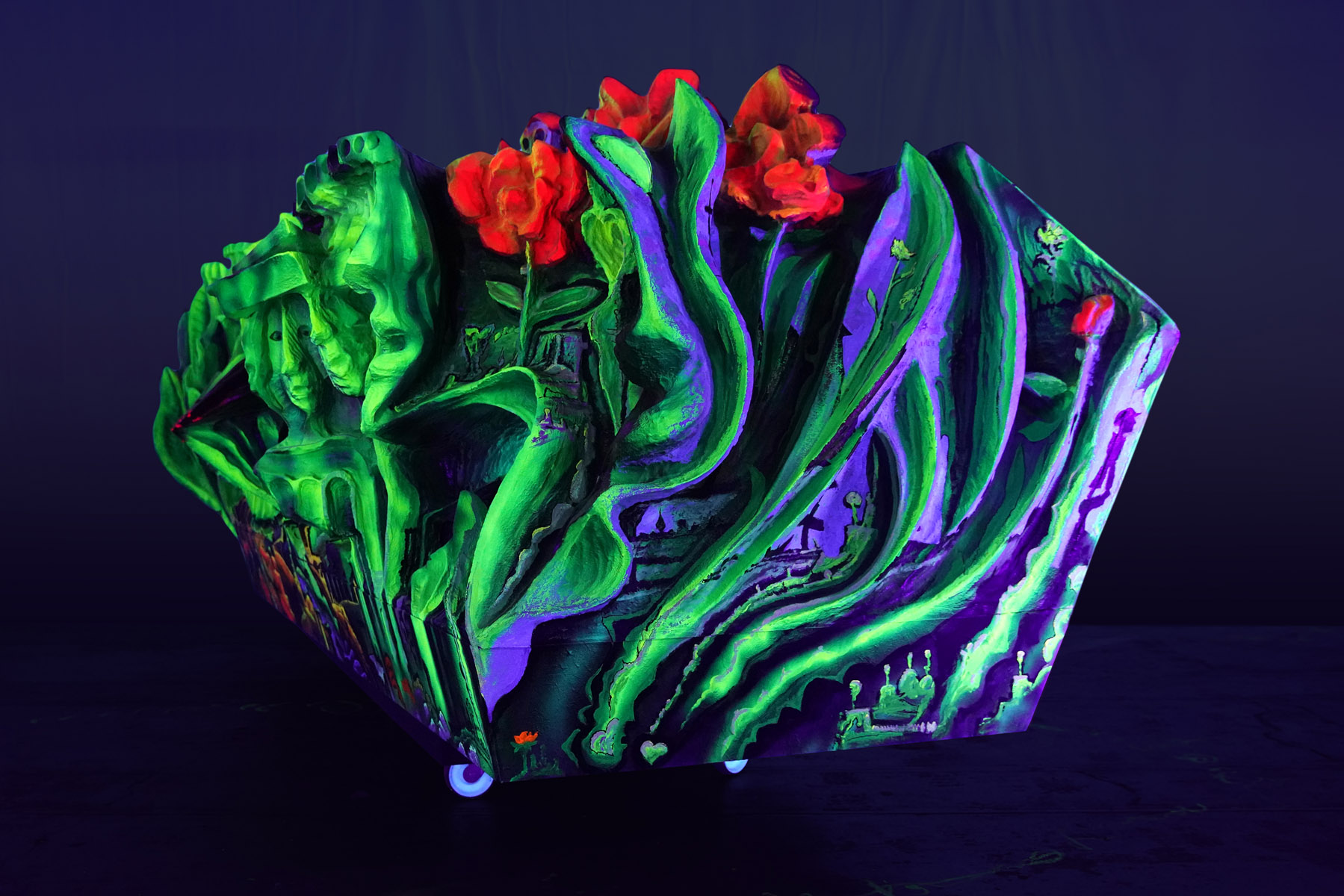 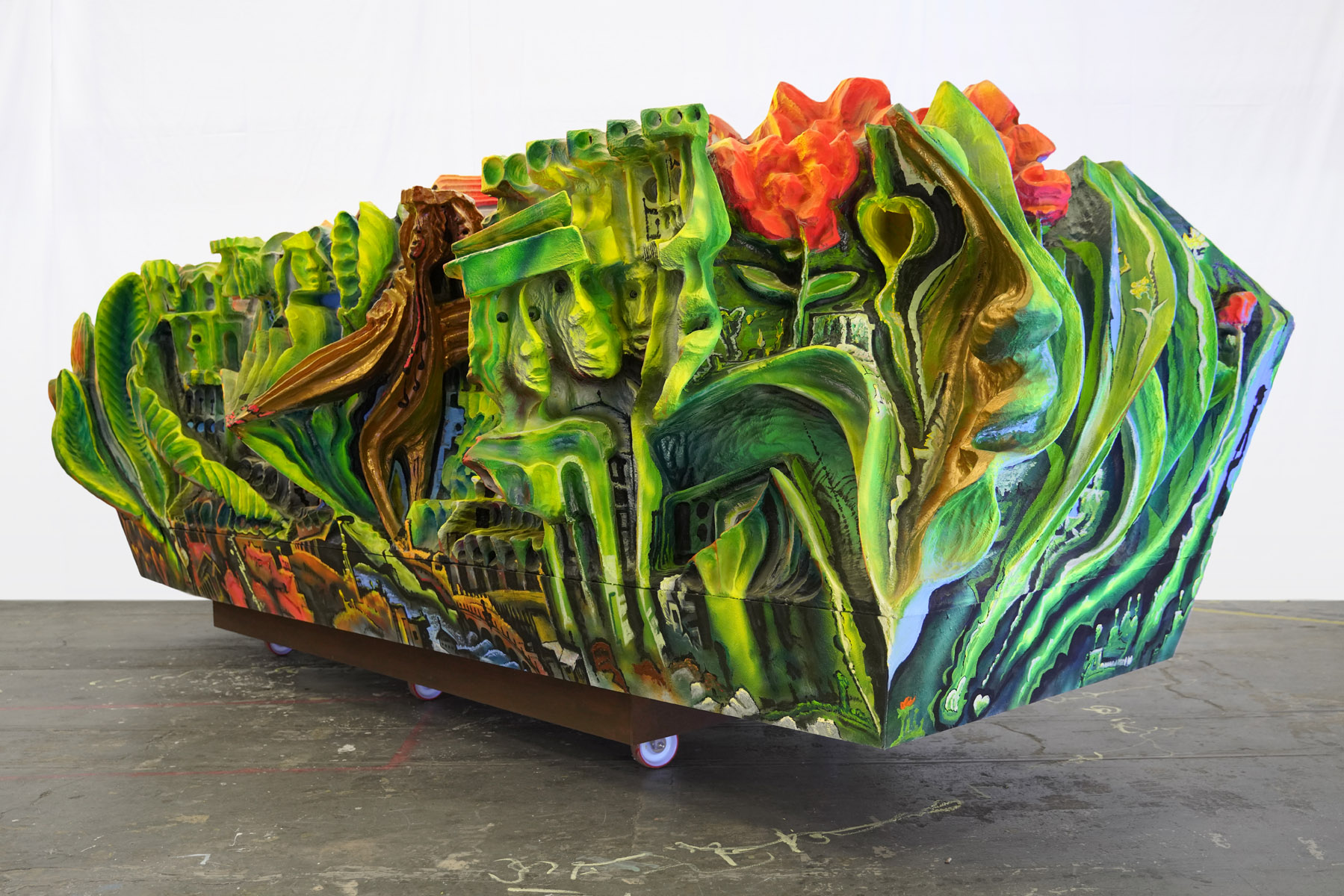 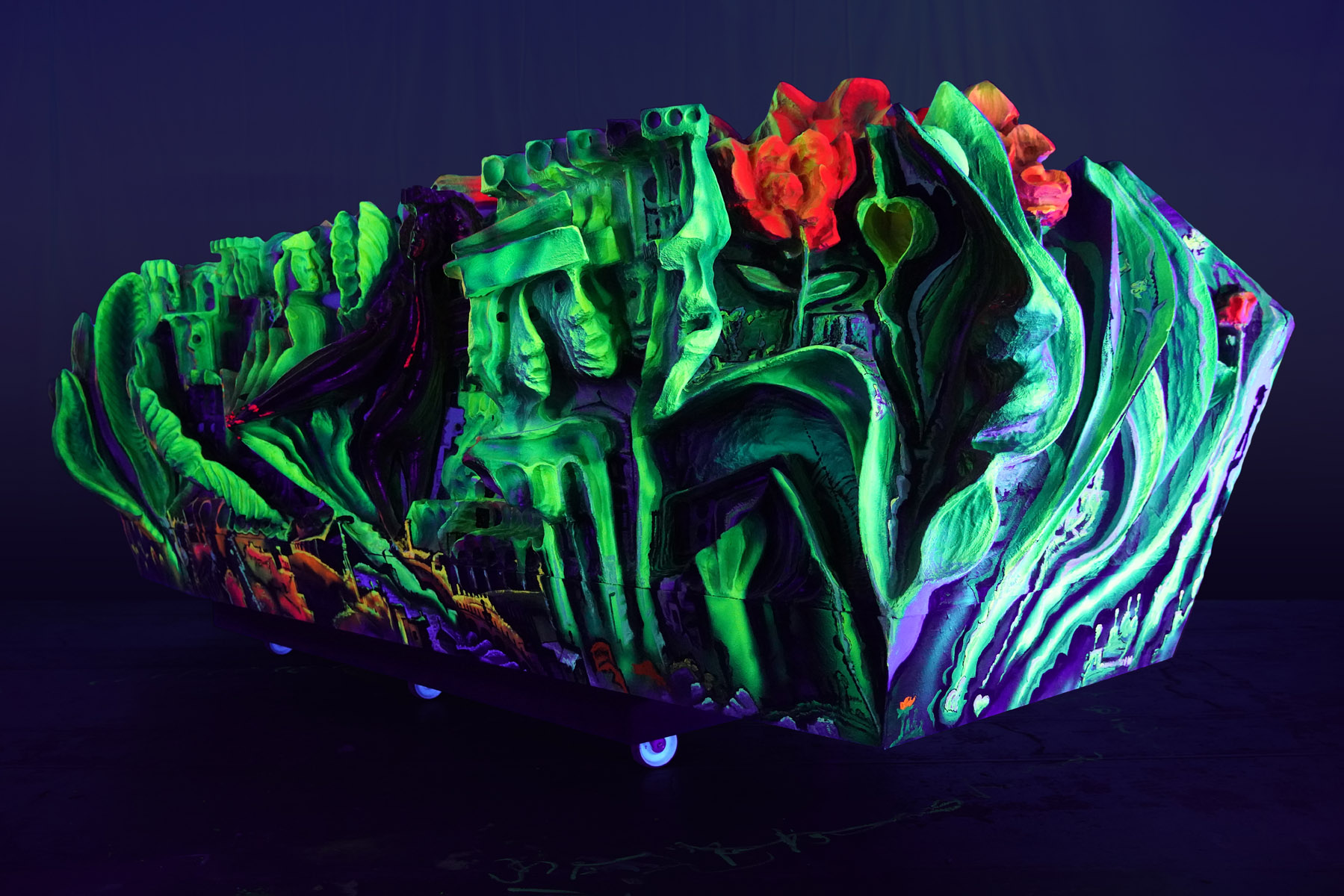 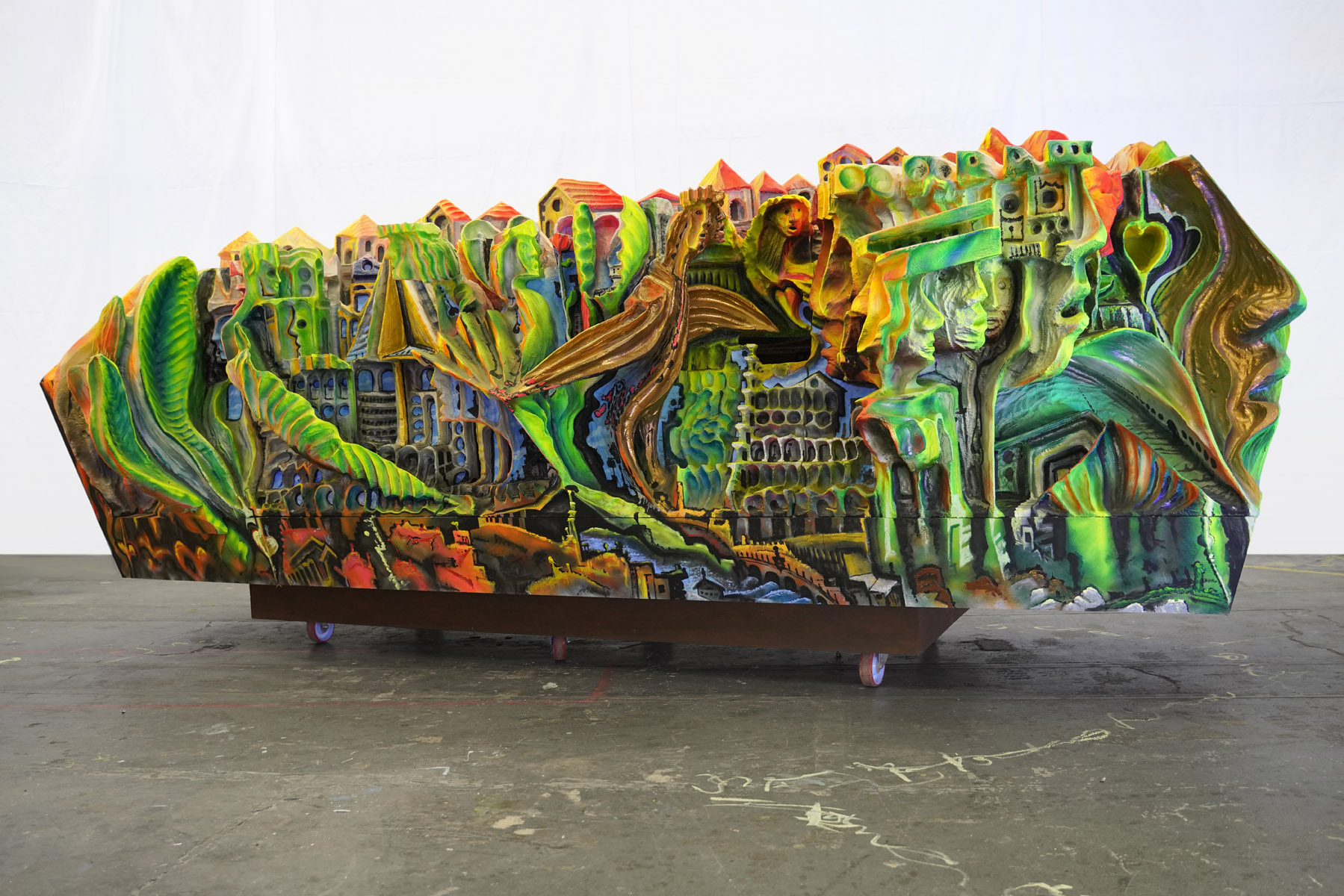 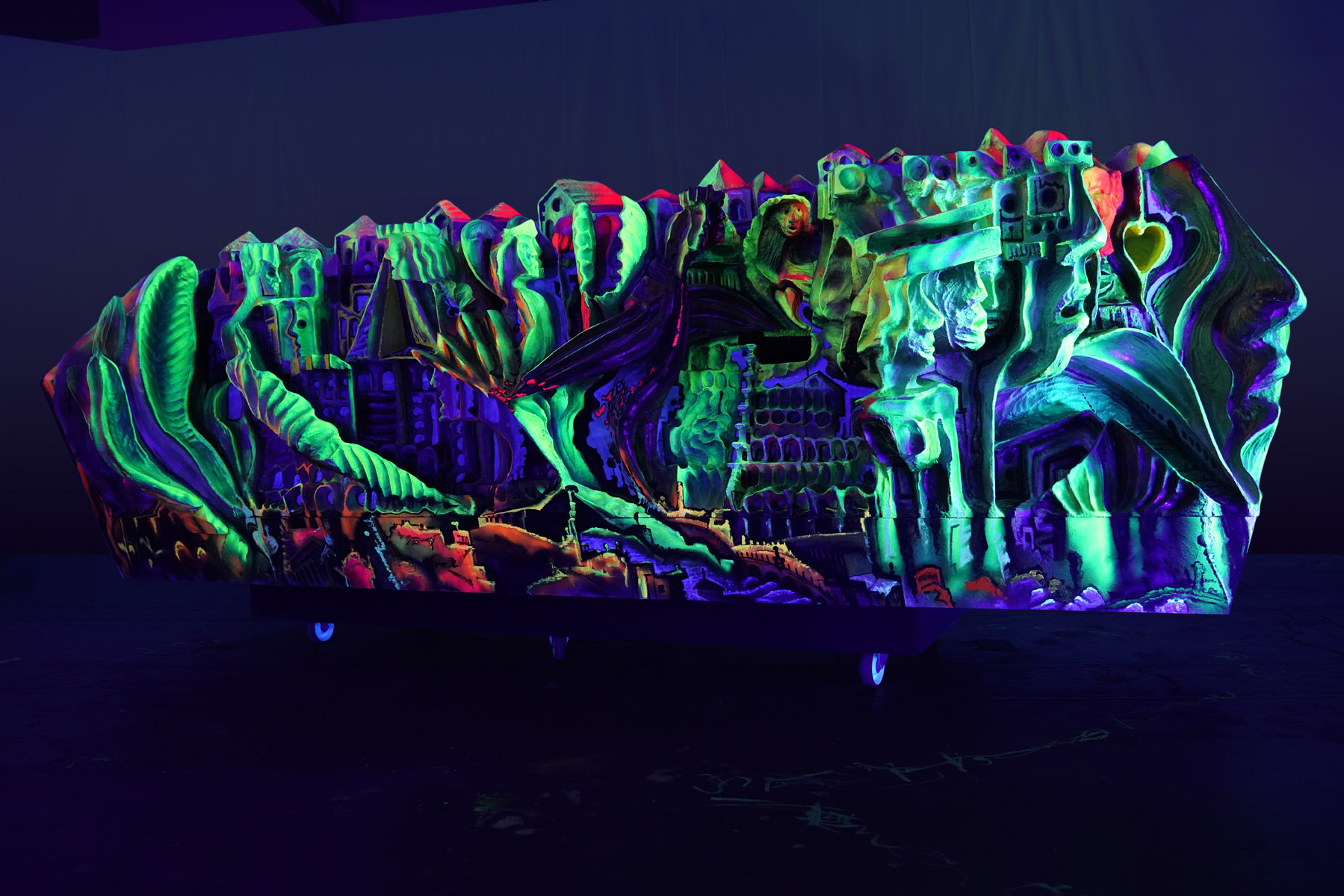 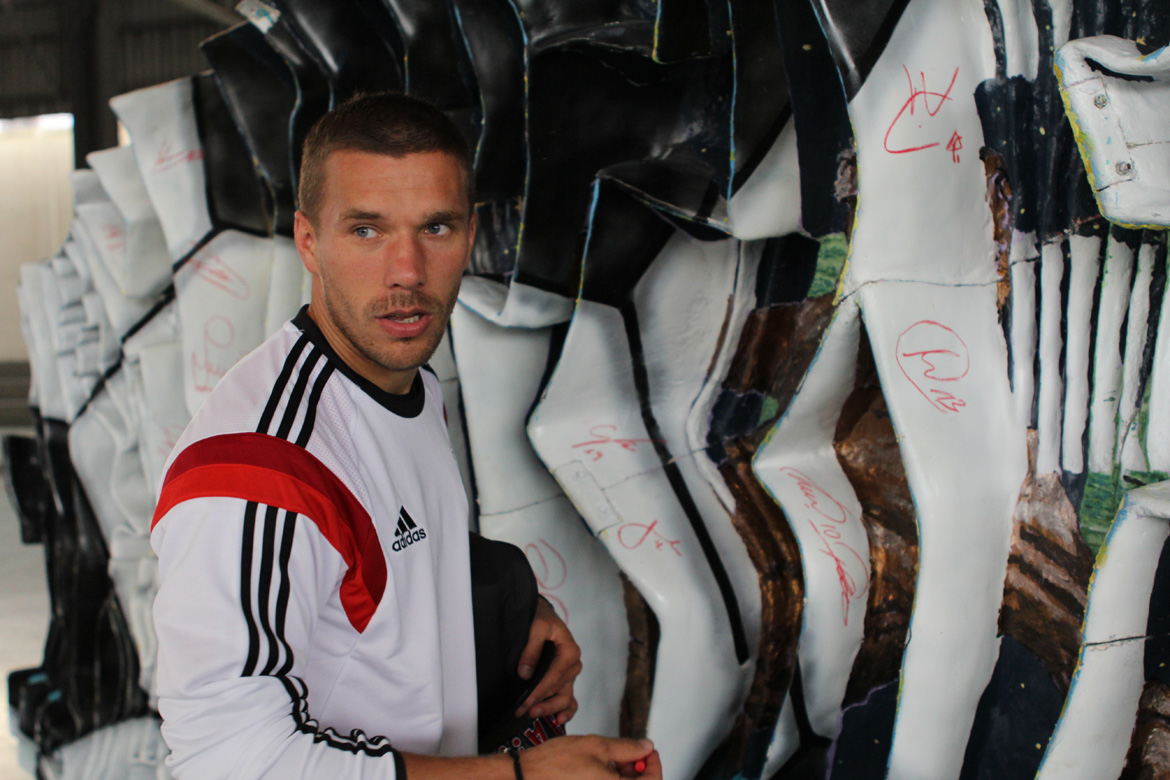 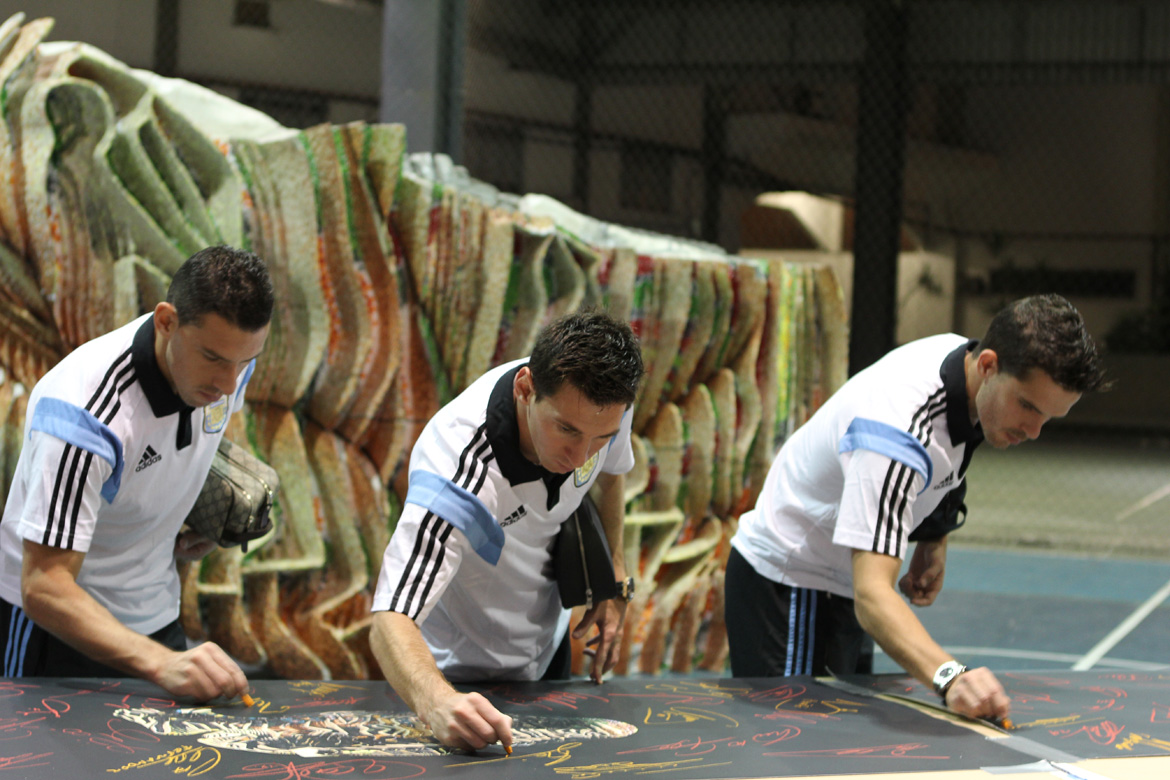 One of the physically largest Victory Works to date was the sculpture «The Seeds of Victory». Measuring eight meters in width, it was dedicated to the football world championship of 2014. In order to create it, David Pflugi, along with his family and a team of helpers, moved to Brazil, the host country, for a year. In July 2020, tragedy struck: A fire broke out at David Pflugi’s studio, damaging large parts of it. Risking his life by running into the flames, David was able to save many of his works from the inferno at the last moment, with the ceiling caving in only seconds after he emerged from the burning building for the last time. But «The Seeds of Victory» proved too heavy too move: It was completely destroyed. Only ashes and burnt fragments remain.

From the grief of this loss, something new has been created – «From the Ashes», the first Victory Work to be tokenized. Its creation came about very suddenly, when David Pflugi, only days after the fire, decided to channel his distress at the loss he had incurred into an artistic process by creating a new sculpture in memory of the one that had been consumed by the fire.

The bulk of the work on this sculpture was done between August and October 2020. It was first unveiled to the public during a performance on October 31st 2020, held in the space where the fire had taken place, and from which the rubble of the ruined building had by then been cleared away. The performance was a symbolic funeral for the lost sculpture, and the object itself – fittingly – takes on the shape of a gigantic white coffin, in which the burnt remains of the old sculpture lie preserved. The original signatures of the 2014 finalists, collected on a canvas work, have been integrated into the object.

In its main view, «From the Ashes» takes on the form of a gargantuan white coffin. The somber simplicity of this shape contrasts with the chaotic dynamism of its reverse side, where a complex relief portrays a raging inferno. As one moves past the object, the work begins to tell the story of its own creation: A sea of flames stretches out before the work's viewers, consuming the buildings of a shadowy, partially abstract city. Human figures and faces are discernible among the flames, partially painted, partially sculpted directly into the relief. They are in uproar, noticeably panicked and distressed by the violent chaos around them.

After a few steps more, one discovers a great, golden phoenix, rising up majestically from the fire. And then, all of a sudden, an even greater surprise: Everything is in unexpected bloom – a beautiful flower garden has begun to grow from the ruins! Where the world was forced to bow to the powers of destruction, new glory is born, and ashes have turned to gold.

The original signatures of the 2014 football world championship finalists, preserved on canvas, have been seamlessly integrated into the work on its far side.

The bulk of the object – its coffin structure – consists of wood, painted white, with a plexiglass viewing window to its interior, where the charred remains of the original sculpture «The Seeds of Victory» lie preserved. LED lights are installed in the interior, providing a clearer view of its contents when it is on display. The complex relief on the reverse side of the object was sculpted directly into blocks of styrofoam, and was then stabilized and hardened with several layers of synthetic resin, and finally painted, using spray paint initially, with further details painted on using mixed forms of paint, including oil paints and phosphorescent signaling paint. When illuminated only by blacklight in an otherwise darkened room, certain elements of the work shine in the dark: The light of the inferno becomes discernible, casting shadows which change the appearance of the relief, revealing new details and adding a new and different context to its visual character.

Two small breakthroughs exist in the relief, through which the interior of the coffin can be viewed from the reverse side. Approaching more closely, one detects a faint scent of burnt material from within. Most of the interior, however, is only visible through the plexiglass window on the coffin side. The interior walls of the coffin around the burnt remains of the original sculpture are also covered in a relief, this one very different from the one outside: It is burnt and partially melted, with material hanging down from the ceiling in a pattern reminiscent of stalactites, giving the impression of a cavernous, naturally formed space far beneath the ground. For the most part, the interior of the coffin is in shades of dark gold, with the exception of one end of the coffin, where the walls in some places take on shades of yellow and red, as if overgrown with some kind of lichen or moss. Opposite to this, a number of somber, ghostly faces emerge from the wall, as if watching over the remains of the burnt sculpture within. Despite the contrasting nature of the interior and exterior relief, there is the hint of a connection between the two – a suggestion that this dark underground world is somehow connected to the explosion of life above, symbolized by the flower garden that has grown in the aftermath of the fire.

«From the Ashes» is an intense and energetic work, reflecting the unusual and difficult circumstances of its creation. It is a powerful artistic examination of the eternal interplay between life and death, destruction and rebirth, loss and triumph, grief and joy – and ultimately a heartfelt and honest plea for hope, even in the face of great adversity.
« The Seeds of Victory (2014)
The Key to Success (2018) »
© 1997 - 2022 David Pflugi  |  Impressum  |  Newsletter    ﻿